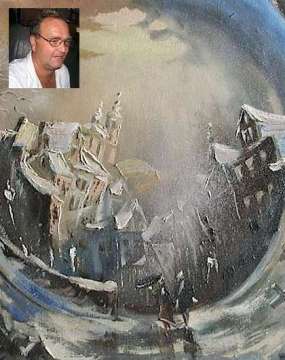 The Biography of Gennady Avdejev

The artist was born in Moscow. In 1955 having graduated from the Institute of Physical Culture and Sports, he coached water polo players while giving all his leisure hours to painting, his favorite pastime.

In 1996, Gennady made a very important step, leaving coaching for art. Since that time, he has been painting very actively, annually attending various symposiums and regularly organizing joint and personal exhibits in Russia and abroad. Mr. Avdejev is a member of several creative associations.

In his works, one sees the beauty of nature. In them, Gennady shows nature at various times of the year, of the day, in various light conditions and weather.
His landscapes are diverse and inimitably original. There are no two pictures alike among them, not even showing similar elements like, for instance, clouds. The artist’s acute vision captures a large number of details and a great many subtle nuances that an ordinary man would never pay attention to. Mr. Avdejev’s landscapes present a surprising combination of prose and poetry, documentary precision and inner delight.

A landscapist who loves nature never uses cheap effects. Gennady shows the world without artificial embellishments, often from most ordinary perspectives and using the simplest compositions. His paintings prompt viewers to see things unordinary in the most usual.

It is in order to mention that simply depicting objects, like trees, rivers or clouds, has never been important to Gennady. What is important to him is using objects to transmit his moods and feelings.

Gennady Avdejev’s paintings do not leave viewers indifferent. They appeal to people’s spirituality, prompting them to see beauty and diversity in the world that surrounds us. And that is the secret of his popularity and success with us, his viewers.

65 At The Sea FIRST ROUND